Last April the team behind the Galway Cycle, set out before sunrise on the first leg of their round trip from Maynooth University to Eyre Square in Galway. The newbies had trained for the experience, but amongst the squad were many cyclists who take part every year. The event began over thirty years ago when many of the organisers created the experience when they themselves were students in the college.

It’s a phenomenally successful team effort that has raised over €1 million for Irish charities. Its a well-oiled production that enjoys faultless co-ordination and beyond raising funds for good causes, their main mission is to have fun in the saddle!

This year their wheels turned in aid of Heart Children and they raised an amazing €50K for Heart Children and specifically for the coaguchek programme which allows us provide home-testing devices to children and adults with CHD who need to be on lifelong warfarin medication. These devices allow them to take their blood thickness readings from home without having the constant disruption of attending hospital for blood tests.

Through sponsorship, on street fundraising on Shop Street in Galway and other donations along the way, the team have generated this huge sum for Heart Children.

An immense thanks to the committee, the cyclists and the helpers for this wonderful contribution. 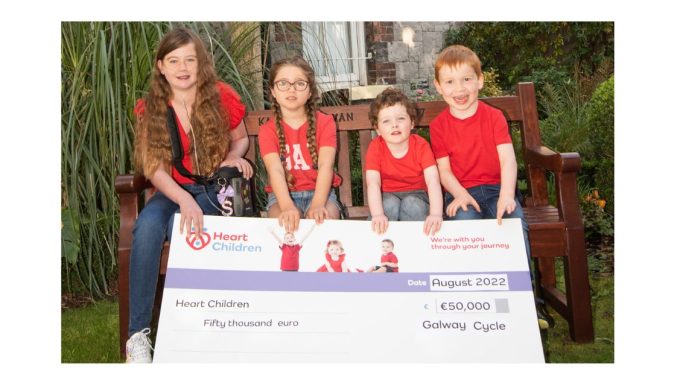 Step out with Deric & Ireland AM…

Step Out With Deric & Ireland AM... - Heart Children Ireland We need you to…

Have Your Say Today

Have you GOT ideas to share with us….in 60 SECONDS OR MORE? Here in Heart…